Did the Smithsonian Cover Up An Ancient Cave City In The Grand Canyon?

A lengthy and extremely detailed story appeared on the front page of the Pheonix Gazette on April 5, of 1909. The story gives an in-depth account of the discovery and excavation of a rock cut vault by an expedition led by a Prof. S.A. Jordan of the Smithsonian and an explorer who was hired as a guide named G.E. Kinkaid. When contacted about the report the Smithsonian claimed to have no knowledge of the discovery or the discoverers. 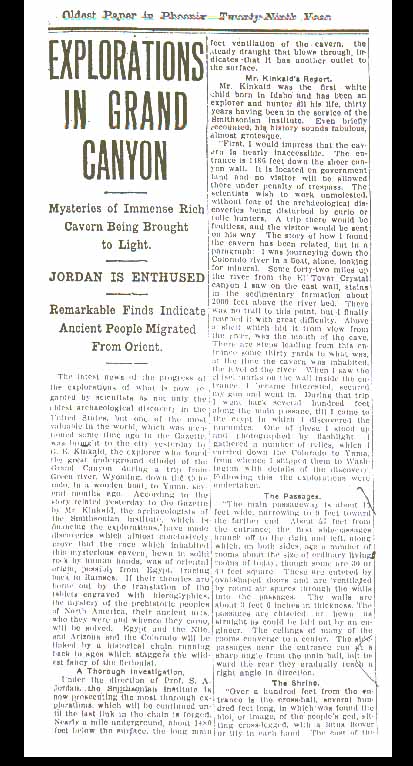 This story is so lengthy and detailed that if it was a newspaper prank of the kind found sometimes in the old west then it puts all the other attempts to shame. In fact, It is rather hard to believe that anyone from this time period could have possessed the knowledge and imagination it would have taken to invent such a story and we are left with a very thought provoking mystery.  Topographical maps of the area reveal another very intriquing thing, the area on the north side of the canyon has Egyptian names. The areas around Ninety-four Mile Creek and Trinity Creek have areas with names lik Tower of Set , Tower of Ra, Horus Temple, and Isis Temple.

Another section of the in the so-called 'haunted canyon' there are names such as Cheops pyramid, The Buddha cloister, Buddha Temple, Manu Temple and shiva Temple. What is so very strange is that the entire areas with these place names are completely off limits.....a total forbidden zone.....even to park personnel. G.E. Kinkaid's report follows. He was a hunter and explorer his whole life apparently working for 30 years for the Smithsonian. Below are journal excerpts from his alleged discovery and subsequent adventures in the 'Cave City'.

I was journeying down the Colorado river in a boat, alone, looking for minerals. Some forty-two miles up the river from the El Tovar Crystal Canyon, I noticed, on the east wall, stains in the sedimentary formation about 2,000 feet above the river bed. There was no trail to this point, but I finally reached it with great difficulty.

This cliff face is purported to be the location of the

The entrance is 1,486 feet down the sheer canyon wall. Above a shelf which hid it from view from the river, was the mouth of the cave. There are steps leading from this entrance some thirty yards to what was at the time the level of the river.

When I saw the chisel marks on the wall inside the entrance, I became interested. Securing my gun, I went in.

I gathered a number of relics, which I carried down the Colorado to Yuma, from whence I shipped them to Washington with details of the discovery. Following this, other explorations were undertaken. So interested have the scientists become, that preparations are being made to equip our camp for extensive studies, the number of archaeologists increasing to from 30 to 40.

From the long main passage, another mammoth chamber has been discovered from which radiates scores of passageways, like the spokes of a wheel. 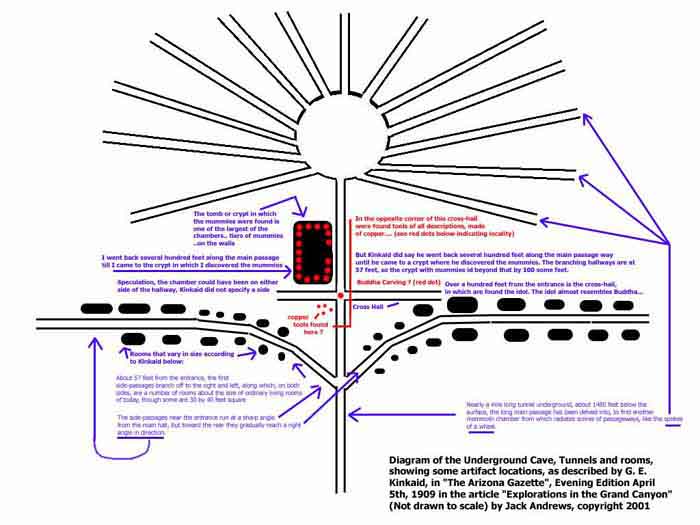 Several hundred rooms have been discovered, reached by passageways running from the main passage, one of them having been explored for 854 feet and another 634 feet. The recent finds include articles which have never been known as native to this country, and doubtless they had their origin in the orient. War weapons, copper instruments, sharp-edged and hard as steel, indicate the high state of civilization reached by these people.

The main passageway is about 12 feet wide, narrowing to nine feet toward the farther end. About 57 feet from the entrance, the first side-passages branch off to the right and left, along which, on both sides, are a number of rooms about the size of ordinary living rooms of today, though some are 30 by 40 feet square. These are entered by oval-shaped doors and are ventilated by round air spaces through the walls into the passages. The walls are about three feet six inches in thickness.

The passages are chiseled or hewn as straight as could be laid out by an engineer. The ceilings of many of the rooms converge to a center. The side-passages near the entrance run at a sharp angle from the main hall, but toward the rear they gradually reach a right angle in direction.

Over a hundred feet from the entrance is the cross-hall, several hundred feet long, in which are found the idol, or image, of the people's god, sitting cross-legged, with a lotus flower or lily in each hand. The cast of the face is oriental. The idol almost resembles Buddha, though the scientists are not certain as to what religious worship it represents. Taking into consideration everything found thus far, it is possible that this worship most resembles the ancient people of Tibet.

Surrounding this idol are smaller images, some very beautiful in form, others crooked-necked and distorted shapes, symbolical, probably, of good and evil. There are two large cactus with protruding arms, one on each side of the dais on which the god squats. All this is carved out of hard rock resembling marble.

In the opposite corner of this cross-hall were found tools of all descriptions, made of copper. These people undoubtedly knew the lost art of hardening this metal, which has been sought by chemicals for centuries without result.

On a bench running around the workroom was some charcoal and other material probably used in the process. There is also slag and stuff similar to matte, showing that these ancients smelted ores, but so far no trace of where or how this was done has been discovered, nor the origin of the ore.

Among the other findings are vases or urns and cups of copper and gold, very artistic in design. The pottery work includes enameled ware and glazed vessels.

Another passageway leads to granaries such as are found in the oriental temples. They contain seeds of various kinds. One very large storehouse has not yet been entered, as it is twelve feet high and can be reached only from above.

Two copper hooks extend on the edge, which indicates that some sort of ladder was attached. These granaries are rounded, as the materials of which they are constructed, I think, is a very hard cement. A gray metal is also found in this cavern, which puzzles the scientists, for its identity has not been established. It resembles platinum. Strewn promiscuously over the floor everywhere are what people call "cats eyes', a yellow stone of no great value. Each one is engraved with the head of the Malay type.

Carved on all the urns, over doorways, and tablets of stone, are mysterious hieroglyphics, the key to which the Smithsonian Institute hopes to discover. The engravings on the tablets probably has something to do with the religion of the people. Similar hieroglyphics have been found in southern Arizona.

Among the pictorial writings, only two animals are found - one of them looking prehistoric.

The tomb or crypt in which the mummies were found is one of the largest of the chambers, the walls slanting back at an angle of about 35 degrees. On these are tiers of mummies, each one occupying a separate hewn shelf. At the head of each is a small bench, on which is found copper cups and pieces of broken swords. Some of the mummies are covered with clay and all are wrapped in a bark fabric.

The urns or cups on the lower tiers are crude, while as the higher shelves are reached, the urns are finer in design, showing a later stage of civilization. It is worthy of note that all the mummies examined so far have proved to be male, no children or females being buried here. This leads to the belief that this exterior section was the warriors' barracks.

Among the discoveries no bones of animals have been found, no skins, no clothing, no bedding. Many of the rooms are bare but for water vessels.

One room, about 40 by 700 feet, was probably the main dining hall, for cooking utensils are found here. What these people lived on is a problem, though it is presumed that they came south in the winter and farmed in the valleys, going back north in the summer.

Upwards of 50,000 people could have lived in the caverns comfortably. One theory is that the present Indian tribes found in Arizona are descendants of the serfs or slaves of the people who inhabited the cave.

Undoubtedly a good many thousands of years before the Christian era, a people lived here which reached a high stage of civilization. The chronology of human history is full of gaps.

One thing I have not spoken of, may be of interest. There is one chamber of the passageway which is not ventilated, and when we approached it a deadly, snaky smell struck us. Our light would not penetrate the room, and until stronger ones are available we will not know what the chamber contains. Some say snakes but others think it may contain a deadly gas or chemicals used by the ancients. No sounds are heard, but it smells snaky just the same.

The whole underground installation gives one of shaky nerves the creeps. The gloomy feeling is like a weight on one's shoulders, and our flashlights and candles only make the darkness blacker. Imagination can revel in conjectures and ungodly daydreams back through the ages that have elapsed till the mind reels dizzily in space. 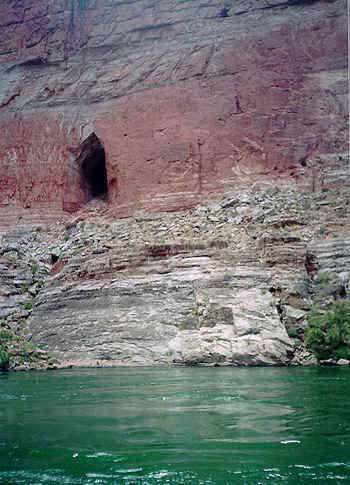 It does not escape the attention of the P.I.A. that most of the southwestern indian tribes have oral histories of having once lived in underground cities, eventually emerging through a 'sipapu' or hole in the ground.  In recent years it has also been proven that the Egyptian elite had access to both cocaine and tobacco, both of which only grew in the America's. Every mummy tested in Museums in Europe and Asia have all been found to contain traces of both these substances. Pre Columbus trans atlantic trade in ancient times is gaining more and more support. Is it too far of a stretch to believe they could have journeyed this way as well?