Yesterday, we reported that Clif High's Web Bot has made a prediction for the upcoming dates of June 7-9. Part of this prediction has to do with Spain withdrawing from the European Union and the use of the Euro. Also, it appears the predictions of more secrets being revealed about the Vatican's very shady business dealings is also manifesting as the home of the Vatican's ex banking chief is searched in an ever widening scandal that the web bot predicts will cause nothing short of the destruction of the Vatican. Now it appears the first signs of this occurrance have now manifested into reality. This is what an unfolding meta-pattern looks like in real time. 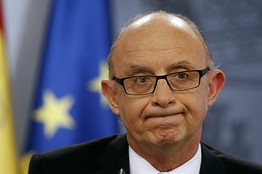