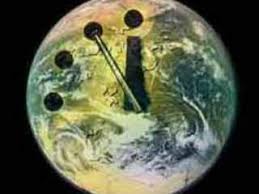 The team at Web Bot (www.halfpasthuman.com) have released a temporal marker report on a series of events to take place leading up to and after the predicted Global Coastal Event. Some of the predicted temporal markers seem to be in the process of manifesting even as this report is being generated. One prediction in particular has seemingly had a very bizarre confirmation of sorts, having to do with a recent U.F.O landing in the gulf region of Texas near an oil platform. This landing was caught on CCTV which had been attatched to the rig in an effort to thwart thieves from stealing oil in the middle of the night.

To begin with there are a series of events that are on the precipice of occurring. The following will be an abbreviated version of the new report as we have compiled it:

There are clear indications that two factors will affect the current food supply in North America. One is a sudden and drastic rise in food prices followed by outright shortages of various items at the local supermarkets. The current drought situation in the bread basket of North America will lead to desperation for food in other parts of the globe.

Stresses in the food supply will lead to a clear seperation of two distinct lines of thinking among the people. There will be large numbers of people who choose to "remove themselves" from the greater portion of the herd. This will become ever more visible to the people who are unable to percieve the dangers of the changing environment.

It is predicted that the food supply stresses will also be tied to an economic scandal of large preportions that will preced a spurt of "banker suicides". This occurs right before a major economic collapse based on the devaluation of the U.S. dollar.

There are clear indications that the price of silver will rise sharply over the next decade and the web Bot predicts a time when various bankers and individuals in government will attempt to "strip mine" the populace of various precious metals. What mechanism will be used for this purpose is at present unclear. Note that the web bot makes very little mention of gold prices increasing but is clear that silver is the way to go.

The next temporal markers are all said to happen near simultaneously:

5. The next major event will be a "derivatives explosion" that will be so large as to devastate the world wide economy. This happens just as the Chinese begin to offer the "renembi" as a global reserve currency. This derivatives explosion will cause such a mountain of debt that it leaves officialdom "speechless" with "blank looks".

6. A major gold theft of some kind is described as occurring that will be larger than that ever before seen in history.

7. A housing collapse is also predicted to occur when those in the banking industry begin to dump vast amounts of housing on to the market as a sort of "political statement". This is predicted as occuring during a sixteen day period in March.

8. The housing collapse leads to a poverty wave where the number of Americans living on $2 a day rises to an all time high.

9. Commercial real estate then collapses leading to a "homesteader movement" whereby entire societies of homeless people take over commerical high rise buildings and begin to turn them into housing with off-grid capabilities.

10. It is predicted that the formation of "state banks" will literally rupture any remaining power of the Federal Reserve and this will begin in California.

11. At the same time that the economic stress unfolds, all foreign aid overseas is halted by the U.S. government.

12. Public trials are predicted, whereby citizens apparently hold court themselves over a number of individuals who are charged with "crimes against humanity."

13. Large numbers of people form communities and become self organized after many chaotic shock waves of 'design' are unleashed on the public. This designed impact is financial in nature, however, there are clear and consistent markers indicating that it is exogenic forces that lead to the ultimate breakdown of society in its current form.

14. Sun Disease: It is predicted that the sun will have a major impact on life on this planet over the next few years. This will lead to massive planetary changes that range from history breaking flooding due to rising ocean levels as well as massive forest fires causing deforestation. New deserts will form in various parts of the world and winds will become a major problem for an extended period of time. This solar activity will affect Antartica in many ways, produce areas of ionizing radiation on earth and may even bring down the world wide power grid. The web bot does not come right out and state this as a temporal marker but makes various references to "bad effects on existing electrical infrastructure".

The Global Coastal Event is supposed to occur by June 1, 2013. Up thrusting water will flood all Pacific coastal areas and some Atlantic coastal areas and is facilitated in part by a "plate rupture". This is not stated as the total cause but "participates" in the event. This is followed by flooding on global level not witnessed by humanity since Noah's flood. The Web Bot describes inland cities being completely inundated with water from the same thing that causes the G.C.E.. Some of this flooding inland will not occur for days or weeks after the G.C.E.. The ciites most at risk are those near various rivers in North America. At the same time as the G.C.E., a world wide earthquake is predicted to occur. This prediction matches that of the Hopi indians who also predict a worldwide earthquake at the end of days. The Hopi also speak of the emergence in the sky of the "blue kachina" or blue star that will precede the end of the current society. We believe that the comet ISON due to appear later this year will fulfill that prophecy. The Web Bot also alludes to a great body in the sky that will garner attention world wide for days on end.

The most bizarre and extreme of all of the Web Bot predictions is that of alien colonies being formed in various areas after the G.C.E. occurs. The areas include the Gulf Coast of North America as well as areas of the Mediteranean and Baltic seas. This will occur as remnants of the old society begin to migrate and rebuild in inland areas. Interestingly enough as on cue, we have recently had an event occur in the Texas Gulf Coast region that strangely may foreshadow the correctness of this particular prediction. Recently video footage was taken from a Gulf Coast oil rig that was outfitted with security cameras. This footage shows a U.F.O landing near the platform and the fact that this occurred shortly after the Web Bot report was released is very interesting to say the least. The following is a picture and link to that story.