What Is Stalking The Skies Of Chicago?

The skies of Chicago and the surrounding townships are being stalked by a most mysterious mystery. In the last few months numerous credible witnesses have come forth and reported their sightings to Lon Strickler of Phantom's and Monsters. In almost every instance the witnesses have been left utterly shocked and dumbfounded by their encounters. In the anals of paranormal activity these sightings constitute what is developing as a major paranormal occurrence which is sure to withstand the test of time as one of the most bizarre flaps to ever occur in this country. The closest thing in history to what is now occuring in Chicago are the infamous 'Mothman' sightings that occurred in West Virginia, in the town of Point Pleasant and meticulously chronicled by the late John Keel. What is missing in the Chicago accounts and yet was very present in Point Pleasent are the presence of multiple U.F.O. sightings which occurred simultaneously with the famous 'Mothman' sightings. In the case of Mothman, Keel believed that the appearance of Mothman portended a coming disaster. He was correct in that assessment. The main question then becomes is this the case as well in Chicago? Does the appearance of this creature or creatures also portend a coming disaster in that area? The sightings of these creatures has even gained the attention of the Chicago Tribune and were the subject of a major news story. The link to that story is provided here for our readers:

Photo of the Chicago creature as it flew above a local stripmall. 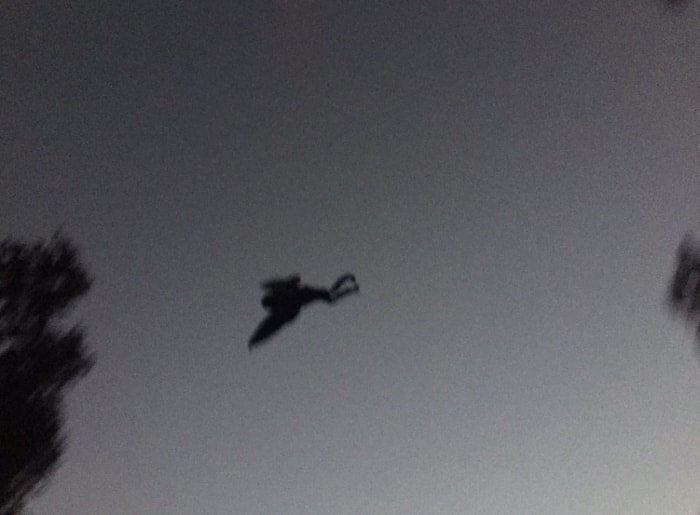 Eyewitness photo taken as the creature was seen flying above a neighborhood in the Chicago area.

Lon Strickler was interviewed by the Chicago Tribune and believes that these creatures are interdimensional in nature. He was quoted by the Chicago Tribune as "I have long theorized that the Mothman, and other unknown winged beings, are multidimensional lifeforms...that can be summoned by high energy  incorporeal entities that reside on our Earth plane." Lon Strickler has recieved so many reports of these creatures now that they have been dubbed the 'Chicago Phantom' and a full accounting of these sightings along with eyewitness descriptions can be found at the following link:

Only one major pattern has developed regarding these sightings. That pattern revolves around water. When plotted on a google earth map, it can clearly be seen that these creatures prefer to stay close to water. The P.I.A. is not yet sure why this is the case but as in all paranormal happenings, patterns are the key to a deeper understanding of the phenomenon and sometimes lead to the solving of such mysteries. Are the sightings of these creatures somehow foretelling a coming disaster in the area? Only time will tell and we continue to examine each and every case as they are reported in hopes of finding yet even deeper patterns.