More evidence of what we theorize to be Earth's interaction with a Type 3 civilization on the Kardeshev scale has recently emerged in headlines of newspapers around the world. This activity is the mutilation and, we believe, sample taking of large numbers of small animals. As we have reported before the incisions are just as precise as they are in cattle mutilations. It's not just small animals and cows that have been discovered with laser like precise wounds. There has literally been found this type of phenomenon in every animal species around the world including humans. As you can now read our Deep Black reports for free from now on you will discover an extensive article in which I describe a number of reasons for the highest probability is that we are dealing with a technology sufficiently advanced enough to appear as magic. Some researchers like Linda Moutlan Howe (who we have extreme respect for) believe that there is some side motive of leaving the animals where the owners can discover them. She also makes the link that humans love their pets and therefore it seems probable to her that this is a sort of revenge or diabolical motive. I would have to disagree and point out that what is most probable is that the animals are found exactly where the killing and sampling occurred. It is only because the technology is so advanced as to appear as magic that it may be the reason no witnesses to the mutilations exist.

The center section of the cats torso is most commonly removed. We believe this is to examine the contents of the stomach.

We believe there is more than sufficient evidence to present a strong case that for a very long time now this ,as yet unknown, Type 3 civilizations has an extreme interest in the life on this planet down to the molecular scale and that the mutilation/samplings of these lifeforms is part of a very long running program to monitor any number factors causing an impact  on the ecosphere. The drone craft conducting these operations are autonomous and possess an artificial intelligence so advanced that they have been able to successfully continue these operations without mass detection by the world's human population. Please read my article located on the Deep Black page.

This is a link to one of the current outbreaks of this phenomenon.

We speculate that what is of interest to the perpetrators isn't the cats themselves but on the contents of what the cats are eating in the natural environment. I have also discovered that house cats are the most invasive species ever in the history of the world and are directly responsible for the extinction of a number of indigenous bird species. Cats in North America consume vast numbers of birds every year and so it is not too far of a stretch to wonder if it the birds being eaten that are of interest here to the perpetrators. I wrote of this extensively in my original report available on the Deep Black page. 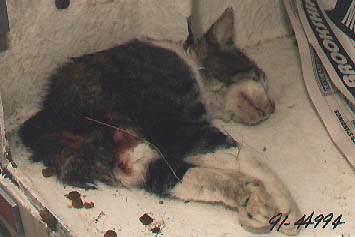 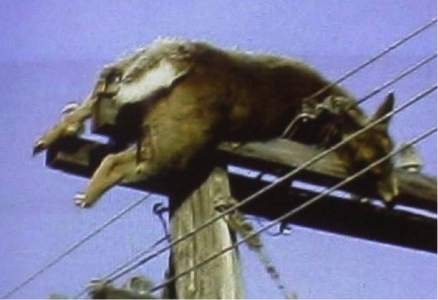 Another specimen that was apparently dropped from a great height and landed on this telephone pole. This was discovered in an extremely remote area by a repairman sent to the area. Other explanations of how a creature of this size could have been placed there are all extremely improbable.